Keyclack produces a range of aftermarket rubber domes that are loosely based on the rubber domes found in Sony BKE video ending workstation keyboards. BKE Redux domes are notable for their sharp tactility compared to stock domes. The V2 line is advertised as slightly less tactile (but still moreso than OEM Topre domes). Their V2 domes are also notable for being sold in sheets similar to stock Topre domes, which makes installation easier. When installing, you'll have to cut some of the sheets into individual domes (eg, for modifier keys).

So far, they've produced two lines with varying weights available in each line: 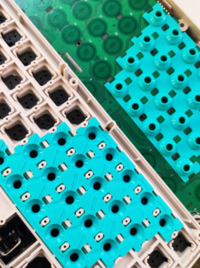 Deskeys manufactures a line of aftermarket rubber domes that are advertised as being similar to Sony BKE rubber domes. DES-Domes provide a sharper tactile experience over OEM Topre domes. These domes are sold in strips of 4, which makes installation easier (but maybe not as much as Keyclack's BKE Redux V2 series).

NIZ, also known as Plum, produces their own line of electrostatic capacitive keyboards and aftermarket accessories. They sell drop-in replacement sheets of rubber domes designed to work specifically with their own keyboard models, but it is possible to cut the domes out to fit a Happy Hacking Keyboard. They also offer a newer heavy-weight line of domes sold in sheets that can be easily cut to fit any layout. This is not a common choice for most HHKB modders, as NIZ products are generally viewed as lower-quality compared to other products. That said, their domes are sold in a range of weights including 35g, 45g, 50g, 60g and 65g. 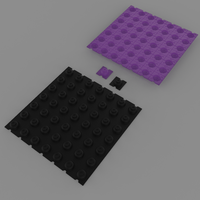 Topre manufactures a line of Realforce keyboards advertised as 'Variable-weight' with domes ranging from 30g to 55g depending on the model, with placement based on home-row typing technique. Generally speaking, keys meant to be pressed with the index and middle fingers are weighted at 45g, ring-finger keys are either 40g or 45g, and pinky keys are weighted at 30g-35g. Most Realforce models place a 55g dome in the escape key.

Essentially identical to the OEM domes found in Happy Hacking keyboards. Not a common choice for modders unless you purchased a previously-modified board without the stock domes and you're looking to get back to the OEM experience.

At one point, the most common choice for HHKB modders looking for a different typing experience. The prevalence of third-party aftermarket domes has lessened the demand for these, but they're still the preferred choice for many users. The tactility on these domes is very similar to 45g OEM domes, and some users claim a slightly sharper actuation point, but less so than DES-Domes or BKE Redux domes. Unfortunately, acquiring these domes usually means purchasing an entire 55g Realforce to part out, which is a costly option compared to high-quality aftermarket products.

For a brief period, a very popular option for modders looking for a more tactile experience. BKE domes are known for their snappy feel and heavier weight. Before they were widely sought-after, Sony BKE keyboards could be found on eBay etc for reasonable prices, but demand drove the cost up on these already-uncommon boards. Most aftermarket domes are loosely moddled after these domes, for users looking for a sharper, more-definied actuation point when compared with OEM HHKB or Realforce domes. 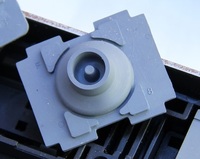