For information on stock/OEM HHKB sliders, see the Sliders page under Components.

In the mid-late 2010s, demand for MX-compatible sliders increased. This was mostly driven by two factors - the relative scarcity and lack of variation in Topre-compatible keycaps, and inversely, the widespread availability and demand for high-quality MX-compatible keycap sets (notably coinciding with the explosion in premium GMK ABS keycap sets, but also including newer flat-profile and high-profile designs available from newer manufacturers).

For a while, the only options to use MX-compatible keycaps on Topre keyboards were to use the NovaTouch sliders described above, or to make/order 3D-printed sliders, which could not be manufactured to the same tolerances as factory-made sliders.

JTK is a Chinese company that first began manufacturing MX-compatible keycaps; they're essentially lower-quality clones of GMK keycaps. For a period, they collaborated with CtrlAlt.io to bring Topre sliders with MX-compatible keymounts to market. Generally viewed as middling-quality, they're not often sought after anymore. These sliders do not have relief molding, which means only extremely thin silencing rings can be used without affecting key travel.

NIZ, also known as Plum, is a Chinese company that produces unlicensed Topre clones. For a period, their sliders were available for purchase separately (as well as their rubber domes) but they appear to be harder to find as of 2021. NIZ is still selling complete slider assemblies that include the housing (useless on the HHKB) from which the sliders and rings can be harvested. Reportedly smooth, but alignment tends to be off (so your keycaps will look crooked from above). These sliders included thick silencing rings and relief molding on the underside (similar to Type-S sliders).

Deskeys is a newer company that started by producing aftermarket rubber domes approximately modeled after Sony BKE domes. In 2019, they announced an MX compatible slider. These sliders include the relief molding found on silenced sliders, which allows for the use of silencing rings without affecting key travel. Many reviews rank these sliders as comparable or even preferable to NovaTouch sliders.

These are the only aftermarket sliders with spacebar and stabilized key support.

Found on Topre Realforce silent models. Similar to the HHKB Type-S slider, with a plastic silencing ring, but with a slightly taller barrel. Unlike most OEM Topre sliders, silent Realforce sliders are purple. These sliders are considered to be of the highest quality. They're likely equal to Type-S sliders but some users prefer the added barrel height and relative exclusivity.

The only way to acquire these sliders new is to purchase a silent Realforce board and harvest the sliders and silencing rings. They may also be found on the secondhand market. 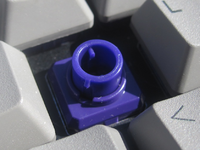 A variant of the Topre Realforce line, HiPro models featured taller 'spherical' keycaps. The sliders on these models are taller to compensate for the height of the keycaps and to reduce keycap wobble.

They're really only useful in combination with HiPro spherical keycaps, and are otherwise rarely or never used in HHKB modding.

Produced between 2014 and 2016, the Cooler Master NovaTouch keyboard was the first Topre slider design to feature a cruciform keycap mount, which allows MX-compatible keycaps to be used instead of Topre's keycap mount. These keyboards did not include a silenced option, and the sliders are purple. NovaTouch sliders are still considered to be one of the highest-quality MX-compatible slider options. 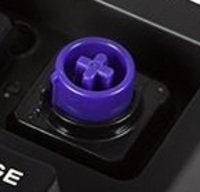